Unmanned aerial vehicles – more commonly known as drones – have been a hot topic in recent years. Many criticize the safety of using these small aircrafts in crowded areas, while others cite concerns with privacy or surveillance. However, one great advantage that drones offer is in the area of property inspection. 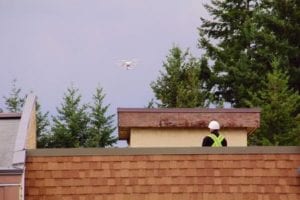 With drones, inspectors can get a much clearer look at hard to reach locations and areas that would be difficult to otherwise survey. For example, an inspector could use a drone and fly it close to a steep roof that a home inspector would not walk on or use it for slate, tile, or asbestos roofs that are fragile. Drones provide a direct means of getting a camera exactly where the eye cannot easily go, and allows inspectors to make a more complete report and detailed recommendations for property owners.

The Federal Aviation Administration has not yet finalized the rules for commercial drone use, though many individual companies and businesses are getting exemptions in the meantime. Currently, business owners can file for a Section 333 exemption from the FAA, allowing the use of drones in controlled, low-risk conditions when accompanied by a civil Certificate of Waiver or Authorization.

Locally, the state of Illinois is also working on establishing its own rules for drones. Enacted in August, the Unmanned Aerial System Oversight Task Force Act establishes the creation of a 22-person board of appointed individuals who will review existing cases, laws and use scenarios to craft recommendations on future legislation. This body must report its findings to Gov. Bruce Rauner and the General Assembly by no later than July 1 of next year, at which point lawmakers and the governor can choose to craft laws and regulations to make the use and operation of drones clearly defined in Illinois.

At Pristine Home Inspections, we look forward to having a clear framework to define the process and procedures for using drones in home inspections. With the ability to protect life and limb from trying to reach difficult locations and the increased visibility available from using this great technology, there are many ways that drones can make inspections even better. Schedule your property inspection today by calling 217-352-3743.