Looking at Smoke and CO Detector Requirements in Illinois

Smoke and carbon monoxide detectors have been around for many years, and we often find that homes don’t meet the requirements of Illinois state law. Let’s take a look at what’s necessary under the law to keep your home or apartment both safe and compliant. 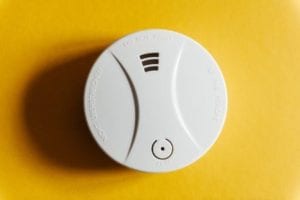 The state of Illinois’ Smoke Detector Act governs the rules around smoke detector placement and requirements. The legislation, which went into full effect in July 1988, states that every dwelling unit, hotel and single family home must have at least one smoke detector within 15 feet of every room used for sleeping. It also specifies that detectors must be at least 6 inches from the wall if ceiling mounted, or 4 to 6 inches from the ceiling if placed on a wall. The act also mandates a smoke detector on every level of a single-family home – including basements, but excluding unoccupied attics – as well as requiring multi-unit buildings have a detector at the top of the ceiling within each interior stairwell.  The full legislation is available on the Illinois Compiled Statutes (ILCS) page.

It’s worth noting that despite the statute, many older homes may be out of compliance with the law’s requirements. These homes have had smoke detectors installed in the same place – sometimes for decades – and when new units were installed, they were installed in the same locations, many times not meeting the stipulations of the Smoke Detector Act. This may be just a matter of convenience – they have always been there – or a lack of knowledge, but it’s worth checking the detectors in your home and verifying that they are where they should – and are required – to be.

The Carbon Monoxide Alarm Detector Act was passed nearly 20 years later in 2006. It took effect at the start of 2007, and requires that nearly all homes and hotels have a carbon monoxide detector within 15 feet of every sleeping space. This alarm may be combined with a smoke detector device in a single unit, though the law requires that there be a different sound for each warning. Unlike the requirement with smoke detectors, a single unit is sufficient for each individual home or apartment space, and there is no specification for stairwells. However, the law does specify that alarms must be either battery powered, hardwired or plug-in models, with the latter two requiring battery backup systems.

Properties may be except from the carbon monoxide detection requirements, as well, if three conditions are met. First, the unit must not use any fossil fuels for heating, ventilation or water heating – so the home must rely on an electric heating system. Next, the property cannot be connected to a garage, and lastly, the home cannot be close to any ventilated CO source. The full text of the legislation is also available on the ILCS.

These devices may seem like a pain when they chirp from a dead battery or go off from burnt toast, but they can also mean the difference between life and death if there is a fire or CO leak in your home. Don’t be a statistic – make sure that your home is outfitted with detectors in compliance with the law! At Pristine Inspections & Testing, we can verify that your home or apartment building is in compliance with these requirements, and can make recommendations on optimal placements if you’re looking to update your detectors or need to add devices at a new building. Contact us today to learn more.