Thermography – From Your Inspection to the Pyramids 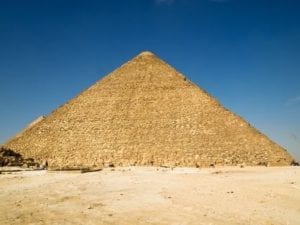 When it comes to home inspections, thermography can be used to uncover a number of hidden details about a property. Thermography is able to show a portion of electromagnetic wavelengths not visible with the eye, just like x-rays and ultraviolet rays. However, thermographers in residential buildings rarely find anything as interesting as what a team of researchers recently uncovered in Egypt.

The country is of course known for its historic pyramids, and few are as well-known as the great pyramids of Giza. Located just outside of Cairo, this set of three pyramids has been studied for quite some time, but just recently thermal anomalies were identified inside of them for the first time using an infrared camera.

New details about these pyramids are emerging in the midst of a new research study dubbed Operation Scan Pyramids. Several teams of researchers and scientists have been scanning the pyramids for weeks, and they plan to continue their work into 2016. However, they didn’t expect that soon after they started that they would uncover some impressive new details about one of the Giza pyramids in particular, Khufu.

Khufu is the largest of Egypt’s pyramids, and CNN recently reported that researchers have found a significant variation of the internal temperature using thermography that was previously invisible to the naked eye. What exactly does this mean? While the researchers can’t yet say for certain, they are reasonably confident that the equipment has uncovered hidden structures and rooms within the pyramid that are causing the temperature anomalies.

Using thermographic imagery is just the first step in uncovering more about the Giza pyramids, but it’s just one of the many tools that we use at Pristine Inspections & Testing. Thermography helps identify issues with moisture, insulation, wiring, radiant heat in floors and ceilings and other hvac issues that could cost you money or make your home less comfortable.

Get a better look at how thermography works with our online simulator, or contact us today to schedule an appointment and find out how thermography can help you find and repair hidden problems that could be costing you money on your heating bills.